Clark Gable refused to attempt to do a Southern accent in Gone with the Wind because he couldn't do one well enough; and he had enough respect for Southerners and Margaret Mitchell not to try. So he didn't try and he acted the part--and was succesful in his portrayal of a Southerner via skilled acting.

There is nothing more idiotic than the delivery of some dipsy Hollywood starlett with "You aallll come back," usually directed as a singular verb.
Posted by Paul Yarbrough, Author at 1:04 PM 3 comments: 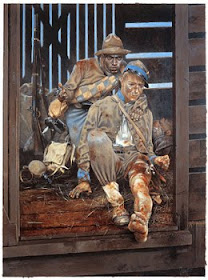